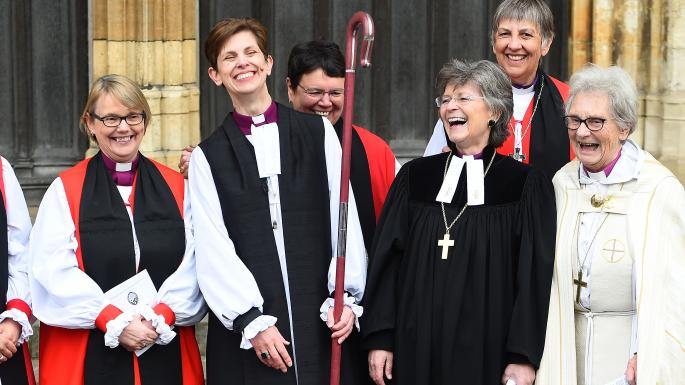 Times caption: The Right Rev Libby Lane, second left, was the first female bishop to be consecrated by the Church of England in 2015; there are now 12 women bishops

At the conference in July, The Rev Jules Gomes’s talk title will be, “Singing in the ruins: How feminists have destroyed the Church of England beyond repair”. Having destroyed the CofE, feminists are now progressing to force major companies to appoint female directors they don’t want, let alone need. A piece by Kaya Burgess, Religious Affairs Correspondent, in yesterday’s Times, emphases ours:

Big companies will be held to ransom over the gender divide in their boardrooms after a powerful group of church investors with £17 billion in assets vowed to vote out directors at firms with too few women at the top.

Pressure on FTSE 350 firms to improve the representation of women in top roles will come from the Church Investors Group (CIG), even though many of its members come from institutions such as the Catholic church, which does not allow women to become priests, let alone bishops or archbishops.

The group, which also counts the Church of England’s investment arm and pensions board, and the Scottish Episcopal and Methodist churches among its members, will also take a hard line on excessive pension deals for chief executives and on climate change, it has warned.

The Church of England currently has 111 serving bishops, of whom just 12 are women, or less than 11 per cent. The Scottish Episcopal Church has only just appointed the first female bishop in its history.

The group has said it will “encourage other shareholders to hold directors to account and refuse to re-elect directors where the company is out of line with best practice”.

Stephen Beer, chief investment officer at the Central Finance Board of the Methodist Church, said the investment group had “ratcheted up its efforts” on gender diversity and said: “Our new policy will enable us to send a clear signal to companies that we expect them to consider fairness when setting executive pay levels. We encourage the wider investment community to hold directors accountable and ensure more responsible stewardship on this critical subject.”

He added, however, that different Christian denominations take different approaches to gender equality within their own institutions for theological reasons.

The investment group will also hold companies to account over executive pay and action on climate page. Members of the CIG will not support renumeration (sic) reports where chief executives receive “excessive” pensions worth more than 30 per cent of their salary, or where firms fail to reveal the pay ratio between the highest and lowest earners.

Financial and pharmaceutical companies that fail to pay the living wage will also not receive backing from the group, while the investors will also vote against the re-election of board chairmen if the company is making too little progress towards “a low carbon world”.

The Rev Canon Edward Carter, chairman of the CIG, said: “If [directors] are not doing something about fairness and about the risks facing us today, they are part of the problem and risk losing the confidence of the public and ultimately their licence to operate.”

In the comments stream, from Hilary Manser:

You can support our work here

Justice for men & boys (and the women who love them)